What personal data we collect and why

Comments
When visitors leave comments on the site we collect the data shown in the comments form, and also the visitor’s IP address and browser user agent string to help spam detection.

Contact forms
When you submit a contact form, we receive your name, email and other predetermined information as part of the form. We are the sole owners of the information collected on this site. We only have access to/collect information that you voluntarily give us via email or other direct contact from you. We will use your information to respond to you, regarding the reason you contacted us. Unless you ask us not to, we may contact you via email in the future to tell you about specials, new products or services, or changes to this privacy policy. You may opt out of any future contacts from us at any time. You can do the following at any time by contacting us via the email address or phone number given on our website:

If you edit or publish an article, an additional cookie will be saved in your browser. This cookie includes no personal data and simply indicates the post ID of the article you just edited. It expires after 1 day.

Cookies can also enable us to track and target the interests of our users to enhance the experience on our site. Usage of a cookie is in no way linked to any personally identifiable information on our site. Some of our business partners may use cookies on our site (for example, advertisers). However, we have no access to or control over these cookies.

Links
This website contains links to other sites. Please be aware that we are not responsible for the content or privacy practices of such other sites. We encourage our users to be aware when they leave our site and to read the privacy statements of any other site that collects personally identifiable information.

Analytics
We will not sell or rent this information to anyone. We will not share your information with any third party outside of our organization, other than as necessary to fulfill your request, e.g. to ship an order.

How long we retain your data

If you leave a comment, the comment and its metadata are retained indefinitely. This is so we can recognize and approve any follow-up comments automatically instead of holding them in a moderation queue.

What rights you have over your data

Where we send your data

Visitor comments may be checked through an automated spam detection service.

infinitee client 500 Harbour Island has been recognized with the Award of Excellence for Website Development and the Award of Distinction for their Consumer Brochure.

Together, Gables Residential and infinitee aimed to brand the newest (and last) luxury apartment development that embodies what it means to live on Harbour Island, surrounded by ocean views and steps away from Tampa’s downtown revival. The strategy included creating an upscale brand identity with additional branding recommendations consisting of design and execution of onsite signage, wayfinding signage and pre-leasing materials. This omni-channel program also incorporated digital, print and social media, as well as public relations designed to reach the highly targeted audience.

500 Harbour Island was recognized with the Award of Excellence for website development created by infinitee. The website is image-intensive and responsive to capture prospective residents online and serve as an information source. The cleanliness and organized layout allows for a seamless user experience and the established branding is carried throughout showcasing the luxury details and amenities while mirroring the oceanic scenery that tie in the surroundings.

500 Harbour Island was also recognized for the Award of Distinction for its consumer brochure. infinitee created a positioning line with a bit of a double entendre playing on the upscale development and vivacious lifestyle, coupled with its island surroundings giving birth to “Urban Living. Island Time”. The leasing brochure built on this positioning line having essentially two covers. The first half of the brochure showcases the proximity and experience of of downtown Tampa (“Urban Living”)  and the second half focuses on the serenity and tranquility of 500 Harbour Island’s spa-like amenities and its distinct island address (“Island Time”).

For more insights on this upscale brand identity campaign outside of the web development and brochure, see infinitee’s blog on 500 Harbour Island’s Branding Story. 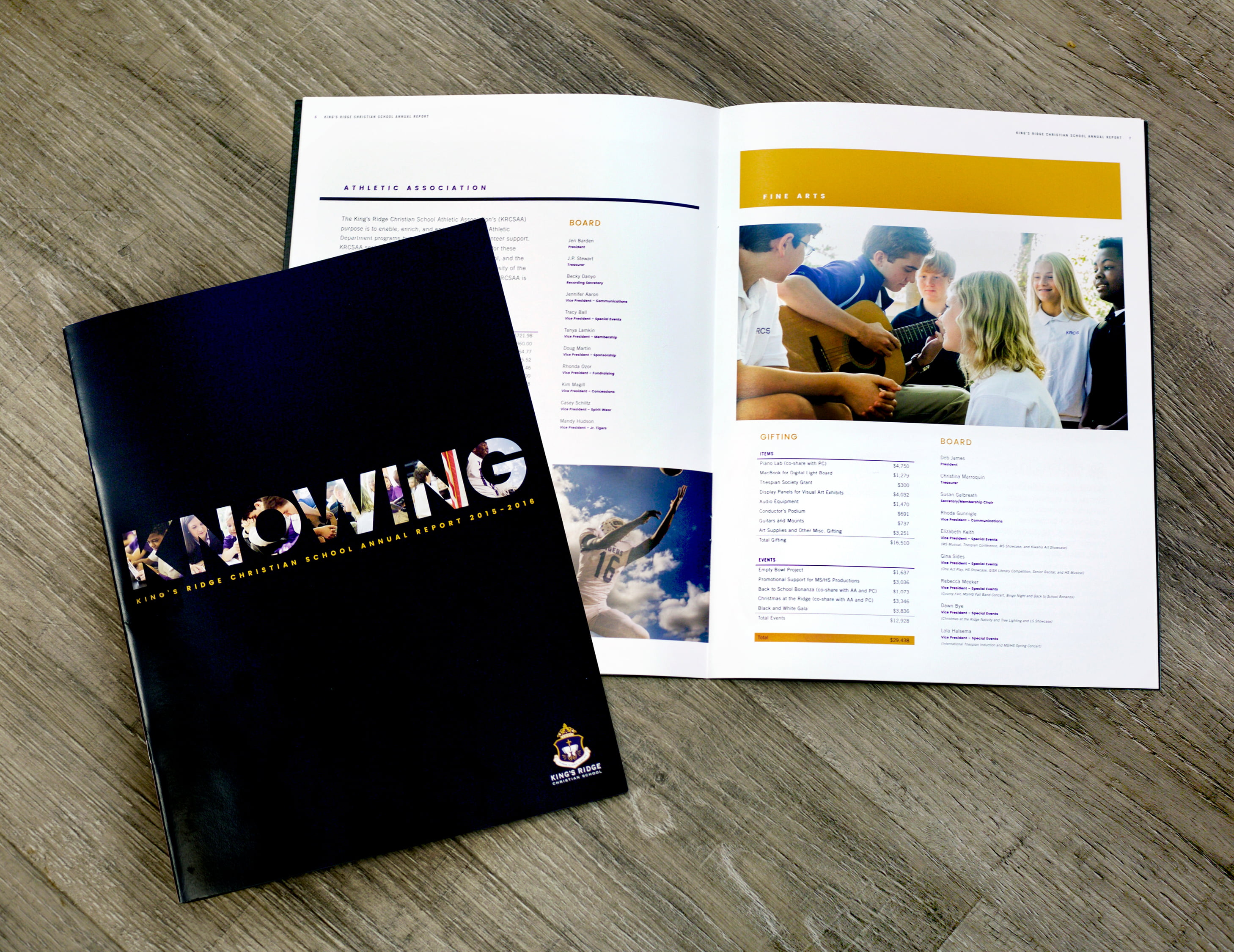 In addition to 500 Harbour Island’s awards, King’s Ridge Christian School was also recognized with the Award of Distinction for both the HIStory Campaign Brochure as well as the 2015-2016 Annual Report.

Historically, King’s Ridge Christian School and infinitee have worked closely developing renowned brochures for the private school’s Capital Campaign in an effort to gain investment for new developments on the college-preparatory campus. This year’s 2015-2016 annual report received the Award of Distinction. The report encompasses campaigns, clubs, departments, financials, as well as information on specific groups such as donors, parent prayer groups and student scholarship organizations. The report details donations, donors and fund usage to convey the importance of giving through elegant graphs and charts displaying revenues and expenses, as well as balance sheets for the school for the 2015-2016 year. 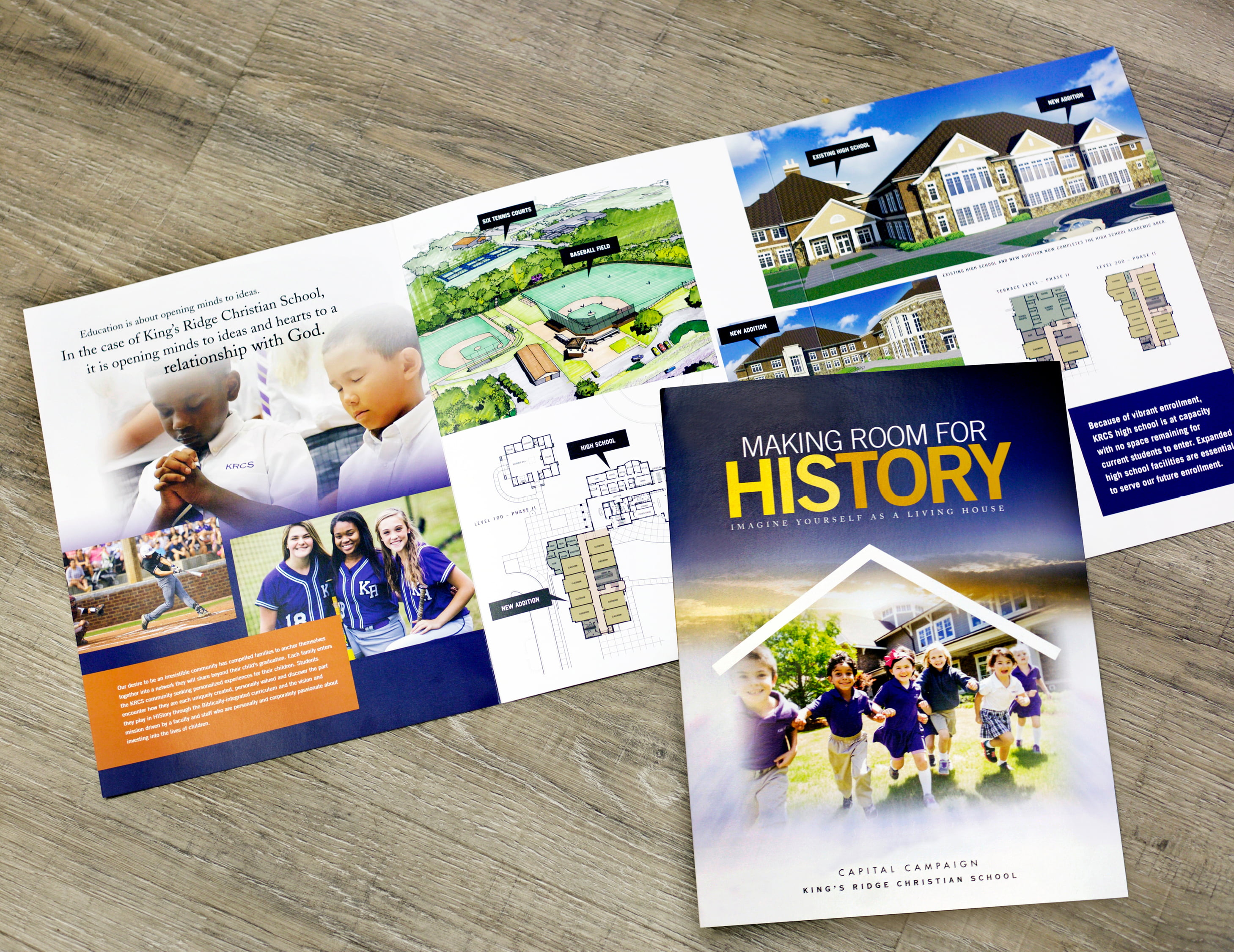 King’s Ridge Christian School was also honored with the Award of Distinction for their Capital Campaign  brochure, created on “Making Room For HIStory” which contains floorplan layouts, new building layouts, as well as new additions to the campus including tennis courts, a new baseball field and a new add-on to the existing high school for classrooms, academic centers, testing rooms and teacher workspace. A key objective of this campaign was to emphasize and illustrate the notion of HIStory, that “King’s Ridge Christian School is really HIStory as it bears the thumbprint of God at every turn.” King’s Ridge Christian School set a target goal of $10 million in donations and gifts, and as of today, they have raised more than half of that.

infinitee is honored to have been a part of developing 500 Harbour Island’s and King’s Ridge Christian School’s marketing and branding materials. They were both an absolute pleasure to work and collaborate with throughout the process, leading to  flawless projects. We could not be more excited about both clients receiving AIVA Communicator Awards as it demonstrates our efforts for impeccable work. It is because of clients like these that makes infinitee love what we do, and continue to do, day in and day out.  – Barbara McGraw, Partner and CMO of infinitee

For over 27 years, advertising has been our life. infinitee’s expertise has been invaluable to many national and regional brands. Our culture comes from our bottom-line mentality and has taught us to think and act fast. We create the proper balance in both strategy and creativity, building brand equity and driving sales. Getting results is what infinitee is all about. Call 1.800.886.3481, x119 to speak with Jocelyn Smith, Founder & CEO.

500 Harbour Island, owned by Gables Residential, is an upscale apartment and residential development located on its own exclusive island in Tampa, Florida, along the Tampa Bay. The development consists of an exclusive 21-story residential neighborhood that includes luxury townhomes, penthouse units, and beautiful waterfront-view apartments of the Tampa Bay, and minutes away from its downtown renewal. Offering pristine views of the bay and the downtown skyline, the island is in walking distance to Tampa’s finest waterfront restaurants and attractions, which can be visited by car, foot or even a boat taxi. Harbour Island offers an incredible sense of exclusivity as well as connectivity to Tampa’s increasingly exciting and growing urban areas for current residents and visitors combined.

King’s Ridge Christian School is a faith-integrated, college preparatory school offering education for pre-kindergarten through 12th grade. Located in Alpharetta, Georgia, King’s Ridge Christian School offers a wide variety of 21st Century Christian education supported by an incredible staff that strives to integrate faith into all aspects of the school, ranging from the classroom to the stage, to on the court and field. All staff share a common goal of inspiring and preparing students to make a strong impact in their future families, careers and communities. King’s Ridge Christian School is not just a school, it is a community that has done exceptionally well as seen by 58 students in the class of 2017 who received a total of $5.7 million in scholarship awards along with a 100% graduation rate.

About the Communicator Awards

The Communicator Awards is the leading international awards program recognizing big ideas in marketing and communications. Founded over two decades ago, The Communicator Awards receives over 6,000 entries from companies and agencies of all sizes, making it one of the largest awards of its kind in the world. They are in their 23rd season. The Communicator Awards honors work that transcends innovation and craft – work that made a lasting impact, providing an equal chance of winning to all entrants regardless of company or agency size and project budget.